If you thought Twitter was “instant”, try again. Until recently, live streaming from your event meant having an A/V crew set up the camera, lighting, and sound, with a rigid schedule in place; a major investment of time and money. Those days are over with crowdsourced live-streaming. Now there’s an app for that.

Live-streaming now exists within every attendees’ hand with apps like Meerkat and Periscope. Meerkat recently made a big impact at SXSW in Austin, TX, as people from around the world had the ability to watch what was happening through the “eyes” of onsite attendees.

Just a few days later, Twitter announced they had acquired Periscope, trumpeting an even better live-streaming experience. Today, Periscope was released to the world and, like Meerkat, is making a massive impact. Even more interestingly, it’s showing how valuable live streaming will be to events around the world.

The live-stream is also accompanied by a viewer count indicating how many other people are watching the stream with you. As well, viewers can comment and ‘heart’ the stream for everyone to see. Streams with the most ‘hearts’ (or, as Periscope has dubbed them, the “Most Loved”) end up with the highest rankings in the app, which garners more viewers.

Your Audience is Larger Than You Think

Founding Editor of MarketingLand.com Danny Sullivan, decided to use Periscope while he attends Facebook’s Developer Conference F8. Upon launching his personal live-stream, all of his followers are notified and instantly he was joined by an audience of 100 on his live-stream.

Rather than posting his feelings and experience, Sullivan was able to provide a window into what he, himself was experiencing. Not a camera crew expertly filming and curating the look of the event – direct access to the real attendee experience. The Benefits of Crowdsourced Live-Streaming

If the proliferation of social media tools has told us anything, it’s that we are hungry for content – that includes your attendees. Periscope and Meerkat offer event organizers the fastest way to distribute content to audiences. Unpolished yes, but genuine and real.

Throughout Sullivan’s broadcast, various conversations took place. One viewer wants to get updated with the event, “Did the Oculus keynote already happen?” Another viewer sees the opportunity to promote an exhibitor, “Say hi to James Pearce at the open source booth.” As Sullivan continues his broadcast, he can see comments from viewers and address them in real-time.

Periscope is set apart from Meerkat in two ways. First, because it’s owned by Twitter, Periscope integrates deeply with Twitter making it easy to create an account and Tweet a link out to the world. Second, Periscope offers a ‘Replay’ option where users who weren’t around during the live stream can go back and watch. The Challenges of Crowdsourced Live-Streaming

Event organizers will have to consider live-streaming apps like Periscope and Meerkat in their privacy policies and security similar to other social media apps. It’s important to ensure attendees know these social channels are actively monitored.

Live-streaming will eat your WiFi. If you promote Periscope and Meerkat as a way for attendees to share their experiences, your venue should be prepared.

Ideas for Using Live-Streaming Apps at Your Events

Add more ideas in the comments, email or Tweet at us too!

Before diving in, answer these questions:

As this article was being written, a large fire broke out in New York City where the tech-news Mashable team took to the streets to report live on scene. The Broadcaster immediately had over 600 active viewers listening to her report as events unfolded. Needless to say, Meerkat and Periscope have brought crowdsourced live-streaming to the masses and it’s moving fast. But if you miss it, don’t worry, just hit ‘Replay’. 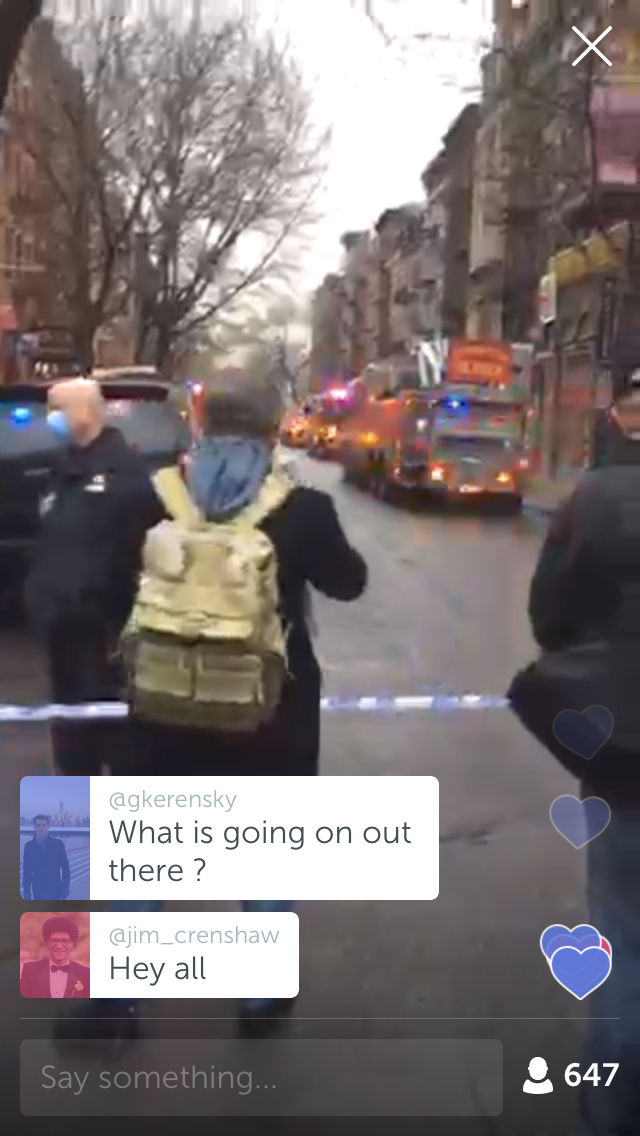